Seminar on Network Neutrality and Next Generation Access Networks 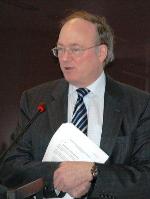 On 16 March 2010, the EFTA Secretariat organised a seminar on Net Neutrality and Next Generation Access Networks. The seminar aimed at showcasing practices in the EFTA Member States relevant to the implementation of the Telecom Package and the Digital Agenda. The seminar brought together 100 practitioners and policy makers from the EU and EFTA Member States for a fruitful debate.

The conference was opened by Ms Bergdis Ellertsdóttir, Deputy Secretary-General of EFTA, who highlighted the central issue surrounding net neutrality and next neneration access, which is access to information for all.

Mr Willy Jensen, Director General of the Norwegian Post and Telecommunications Authority, presented the Norwegian soft law approach to network neutrality, the result of a collaborative effort between the regulator, industry and consumer organisations. According to Mr Jensen, net neutrality is needed to preserve the internet as an open and non-discriminatory platform for all types of communications and content distribution. Net neutrality means that the network should be open and that all traffic should be treated equally. He then outlined the principles upon which the Norwegian Model is based and drew parallels with initiatives in the European Union, the United States and Japan.

Mr Malcolm Harbour from the European Parliament presented the view that the debate on network neutrality is really about how one can create an investment environment and at the same time empower the consumer. Network providers should be allowed to offer premium services and mandated rules on quality of service should safeguard consumer interests. What is needed is transparency at the contractual level so that consumers know how networks are managed. According to Mr Harbour, the term "net neutrality" has been hijacked and the issue has lost focus. Net neutrality is used to cover a number of different issues and no common understanding appears to exist.

Ms Henriette Francati from the Norwegian operator Telenor explained that Telenor would have behaved in the same way even without the agreement on net neutrality. The agreement reflects common internet etiquette in Norway and customers would not appreciate Telenor engaging in anti-competitive or discriminatory behaviour. The positive effects of the guidelines are that they promote dialogue rather than conflict, put the consumer first, represent a practical and balanced approach and allow for a certain degree of flexibility.

Mr Peter Rodford, Head of Unit in the European Commission, focused his presentation on the ongoing analysis within the Commission with regard to the need for action at a European level to safeguard the neutral character of the internet. In the continuous reflection on this issue several issues must be taken into account, including the consumer perspective, questions related to privacy and fundamental rights, media expression, the technical issues involved and the economic dimension including access for content providers to networks. Commissioner Kroes will present the Commission's view on some of these issues in a speech to be held in Paris in April. Mr Roland Honekamp from DG INFSO later reflected on the Commission's actions with regard to Next Generation Access Networks and talked briefly about the Commission's recommendation expected later this year.

Mr Philipp Metzger, Vice Director of OFCOM Switzerland, presented the roll out of the multiple fibre model in Next Generation Access in Switzerland and talked about the role of the NRAs and the different stakeholders involved. Broadband coverage in Switzerland is already high and the multiple fibre model is expected to deliver an even higher level of activity, ensuring competition and increasing the level of cooperation.

Here you can find the final work programme as well as the seminar presentations and list of participants: