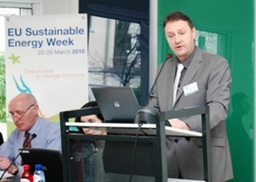 EFTA’s Deputy Secretary-General, Ms Bergdis Ellertsdóttir welcomed the participants, stating inter alia that EFTA is supporting European standardisation, politically as well as financially, together with the European Commission. She continued by emphasising that standardisation has continuously been an important contributor to the functioning of the Internal Market and to the achievement of important policies. Furthermore, EFTA believes that standardisation will continue to increase in importance in Europe. The Deputy Secretary-General also expressed a genuine interest on behalf of the EEA EFTA States in following closely and influencing policy development the field of energy. By implementing EEA relevant EU energy legislation, the EEA EFTA States have become fully integrated in the internal energy market.

The aim of the seminar was to provide an overview of the standardisation activities of the two organisations on energy management and energy efficiency. The seminar is one of many events during the EU's Sustainable Energy Week, which is part of the Sustainable Energy Europe Campaign. The campaign was launched in 2005 and contributes to achieving the EU’s energy policy targets within the fields of renewable energy sources, energy efficiency, clean transport and alternative fuels.

The first part of the seminar focused on recently adopted standards and the present standardisation work programme of CEN and CENELEC. The presentations in this session covered topics such as energy efficiency services, terminology, energy audits and benchmarking methodologies, and standards on energy performance of buildings.