Policy Seminar: Half in - half out of the the Banking Union 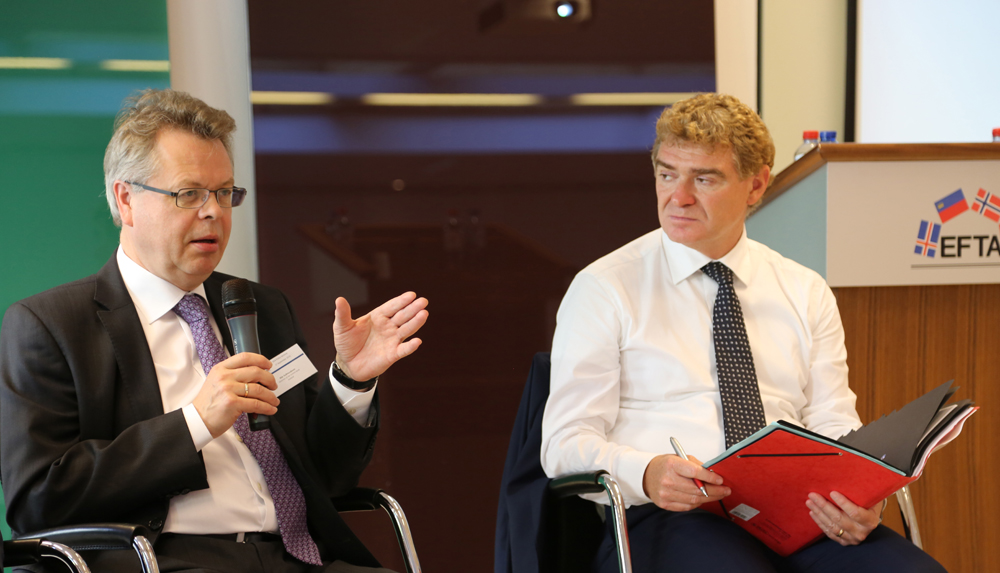 On 27 September 2016, the EFTA Secretariat organised a policy seminar focusing on how banking sector policy in the EEA EFTA States is affected by their full participation in the Internal Market in financial services, whilst being permanently excluded from the single currency and the Banking Union.
Keynote speeches were given by Mr Már Guðmundsson, Governor of the Central Bank of Iceland; Mr Tore Vamraak, State Secretary for Financial Services at the Norwegian Ministry of Finance; and Mr Mario Nava, Director for Financial System Surveillance and Crisis Management at the European Commission, DG FISMA.
Mr Guðmundsson discussed the challenges posed by the unhindered passporting of banks within the Internal Market to small open economies that cannot provide backstops in the relevant operating currency of these cross-border financial institutions. He also discussed the macroprudential framework that the Icelandic authorities are currently implementing to prevent a repeat of the 2008 financial crisis.
Mr Vamraak explained how access to the Internal Market has boosted Norway’s trade with the EU – by far its most important trading partner – since the EEA entered into force in 1994. It has provided stability and more competition, which have, in turn, resulted in lower prices and greater competitiveness of Norwegian companies. Norway has enjoyed its own monetary policy, with a floating yet strong currency, strong public finances and well-capitalised banks.
Their interventions were followed by a panel debate, moderated by Ms Helga Jónsdóttir, College Member, EFTA Surveillance Authority, with participation from the seminar speakers, as well as Mr Carl Flock, Director of Legal Affairs at Finance Norway; and Mr Simon Tribelhorn, Director of the Liechtenstein Bankers Association.
In his opening address, EFTA’s Deputy Secretary-General Mr Dag Wernø Holter reminded seminar attendees that two of the three EEA EFTA States had first-hand experience of the negative side of financial services; first with the Norwegian banking crisis over 25 years ago and then with the collapse of the Icelandic banking sector in late 2008.
“Our Member States therefore understand very well the importance of striking a balance between regulation that allows financial services to spur economic growth, and not threatening economic and financial stability. The financial services sector plays an important role in the EEA, not just in its own right but also as a catalyst for the functioning of other parts of the Internal Market and economic growth,“ he said.
Together with the adoption of the first package of acts on the European Supervisory Authorities, the EEA EFTA states will now be able to continue as full members of the Internal Market in financial services within the institutional framework already established in the EU.
Find more pictures from the seminar here.
Share this
Email Facebook Twitter Google Plus LinkedIn