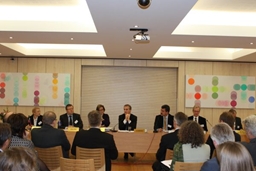 The aim of the meeting, which was held upon the initiative of the two advisory Committees, was to give the advisory bodies the opportunity to discuss EEA matters with Ministers in connection with the EEA Council meetings.  The meeting was well attended by representatives from both committees who were briefed by the EEA EFTA Ministers on the discussions of the EEA Council earlier that morning.  This was followed by questions and comments from members of both committees.

The Norwegian Chair informed that this would become a regular feature in the EEA work and take place once a year.  This will undoubtedly strengthen the dialogue between the governing and advisory bodies under the EEA Agreement.

Following this, Liechtenstein Ministerial Chair of the EFTA Council also met with the Consultative Committee to discuss recent developments in EFTA third-country relations.