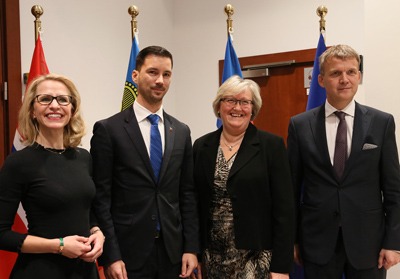 From left: Ms Aurelia Frick, Minister of Foreign Affairs, Liechtenstein; Mr Lukas Parizek, Secretary of State of the Ministry of Foreign and European Affairs, Slovak Republic; Ms Elisabeth Aspaker, Minister of EEA and EU Affairs, Norway; Mr Stefán Haukur
At the 46th meeting of the EEA Council, held in Brussels on 15 November 2016, Ministers discussed cooperation within the European Economic Area, focusing on the importance of maintaining and further developing a homogeneous Internal Market as an engine for growth. An orientation debate was held on the European Commission’s new strategy for the Single Market, including the collaborative economy.

On this occasion, the EEA Council discussed developments in Europe since its last meeting in May 2016. During this period, some major events had occurred which may impact the EEA, such as the United Kingdom’s referendum on EU membership in June.

The EEA EFTA States hold the Presidency of the EEA Council this term. The meeting was chaired by Ms Elisabeth Vik Aspaker, Minister of EU and EEA Affairs, Norway, and co-chaired by Mr Lukas Parizek, Secretary of State of the Ministry of Foreign and European Affairs, Slovak Republic, representing the Presidency of the Council of the EU. The EEA EFTA States were further represented by Ms Aurelia Frick, Minister of Foreign Affairs, Liechtenstein, and Mr Stefán Haukur Jóhannesson, Permanent Secretary of State, Ministry for Foreign Affairs, Iceland.

Ms Vik Aspaker highlighted the EEA EFTA States’ efforts to reduce social and economic inequalities throughout the EEA via the EEA Grants, and reminded the EU counterparts that all national parliaments had ratified the financial commitments for the 2014-2021 funding period during the summer.

She also welcomed the first package of Decisions related to the European Financial Supervisory Authorities, which had been adopted by the EEA Joint Committee on 30 September 2016.

“This is a major achievement,” she said. “Financial services are essential for a well-functioning Single Market. We have now agreed on a solution that ensures regulatory homogeneity of the Internal Market in financial services throughout the EEA, as well as continued access for EEA EFTA operators to the market.”

Ms Vik Aspaker also briefed the EU Council on the measures taken by the EEA EFTA States to reduce the number of legal acts awaiting incorporation into the EEA Agreement.

At the meeting, a progress report was issued on the activities of the EEA Joint Committee, to aid the EEA Council’s assessment of the overall functioning of the EEA Agreement. The Council also discussed ongoing and future developments in the UK following its referendum on EU membership, and the negotiations between the European Union and the United States on a Transatlantic Trade and Investment Partnership (TTIP).

In the political dialogue that followed the meeting, discussions focused on the Western Balkans, Ukraine and Russia, migration, and the EU’s Global Strategy on Foreign and Security Policy.

The EEA Council meets twice a year and provides political impetus for the development of the EEA Agreement, which has been the cornerstone of relations between the EEA EFTA States and the European Union for more than 20 years. 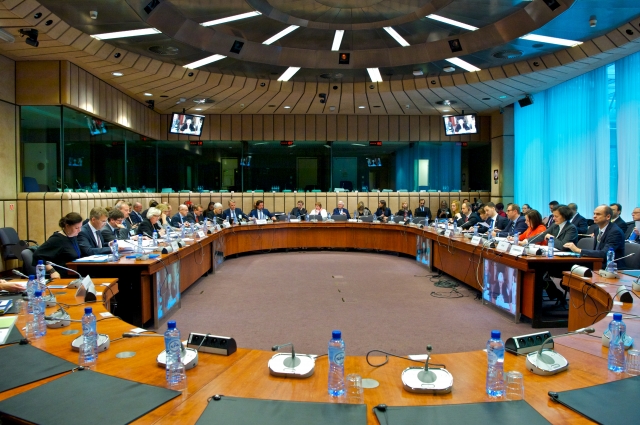