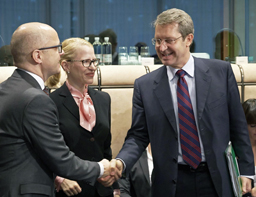 At the 42nd meeting of the EEA Council, held in Brussels on 19 November 2014, Ministers discussed EEA EFTA participation in the European Supervisory Authorities for financial markets, the incorporation of legal acts into the EEA Agreement and the continuation of the EEA financial mechanism for another term.

On this occasion, the EEA Council discussed developments in the EEA Agreement since its last meeting in May 2014. Ministers welcomed the political agreement reached between the EU and EEA EFTA Finance Ministers on the principles for incorporating the EU Regulations on the European Supervisory Authorities for financial markets into the EEA Agreement, and stressed the need to conclude the necessary technical work quickly, in order to ensure effective and homogenous supervision throughout the EEA.

Ministers also commended the efforts made to reduce the number of legal acts awaiting incorporation into the EEA Agreement, which had decreased by 30% since the EEA Council’s last meeting, and discussed the continuation of the EEA financial mechanism for another term.

In addition, an orientation debate was held on current prospects for the EU 2030 framework for climate and energy in the EEA context, which was recently adopted by the European Council.

In the political dialogue that followed the meeting, discussions focused on Ukraine and Russia, and Syria, Iraq and ISIL, including the treatment of foreign fighters returning to Europe.

Conclusions adopted by the EEA Council at its 42nd meeting of 19 November 2014.

High resolution pictures from the meeting are available here.