EFTA seminar on employee involvement in times of crisis 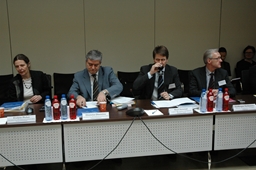 The EFTA Working Group on Health and Safety at Work and Labour Law and the EFTA Consultative Committee met on 11 March 2010 to discuss employee involvement in times of crisis and restructuring. Against the backdrop of the current crisis the European Commission gave an overview of the current legal framework for information, consultation and involvement of employees. EU legislation in this field is part of the EEA Agreement.

More specifically, the Working Group and the Consultative Committee discussed the concept of transnational company agreements. Such agreements are growing in number and substance but there is currently no legislation in place regulating this. The European Commission has been mapping the different types of agreements that exist and could inform the EFTA participants that there were currently about 200 transnational company agreements involving 100 European companies employing 9.8 million workers. This list includes several companies with headquarters in the EFTA States. Ms Evelyne Pichot from the Commission underlined that this largely is a Europe-driven process with corporations in a wide range of sectors concluding a mixture of global and European agreements. The latter do not replace existing collective agreements and mainly focus on issues that can no longer be dealt with at national level alone (e.g. mobility, restructuring, training and equal opportunities). The Commission has established an expert group to discuss and follow developments in this field,  in which the EFTA States also participate.

To provide a better understanding of how transnational company agreements work in practice, EFTA invited Mr Aksel Stenerud from Statoil to present Statoil's framework agreement with the International Federation of Chemical, Energy, Mine and General Workers Union (ICEM). Since 1998, this transnational agreement has supported the exchange of information and further development of good working practices within Statoil’s worldwide operations and covers subject matters such as human rights industrial relations, environmental issues and training programmes. In a European context, Mr Stenerud also underlined the importance of the Statoil European Works Council for improved involvement of employees and social dialogue.

Finally, the Working Group and the Consultative Committee held an exchange of views on other relevant issues in the labour law and health and safety field, including the posting of workers, temporary agency work and the Bilbao Agency on Health and Safety at Work. With regard to the latter, Mr Tregenza from the Bilbao Agency presented its organisation, work programme and future plans. This is of specific interest and relevance to the EEA EFTA States, whose participation in the Agency was formally agreed in December 2009. Mr Tregenza underlined  the role of the tripartite system in the governance of the Agency.