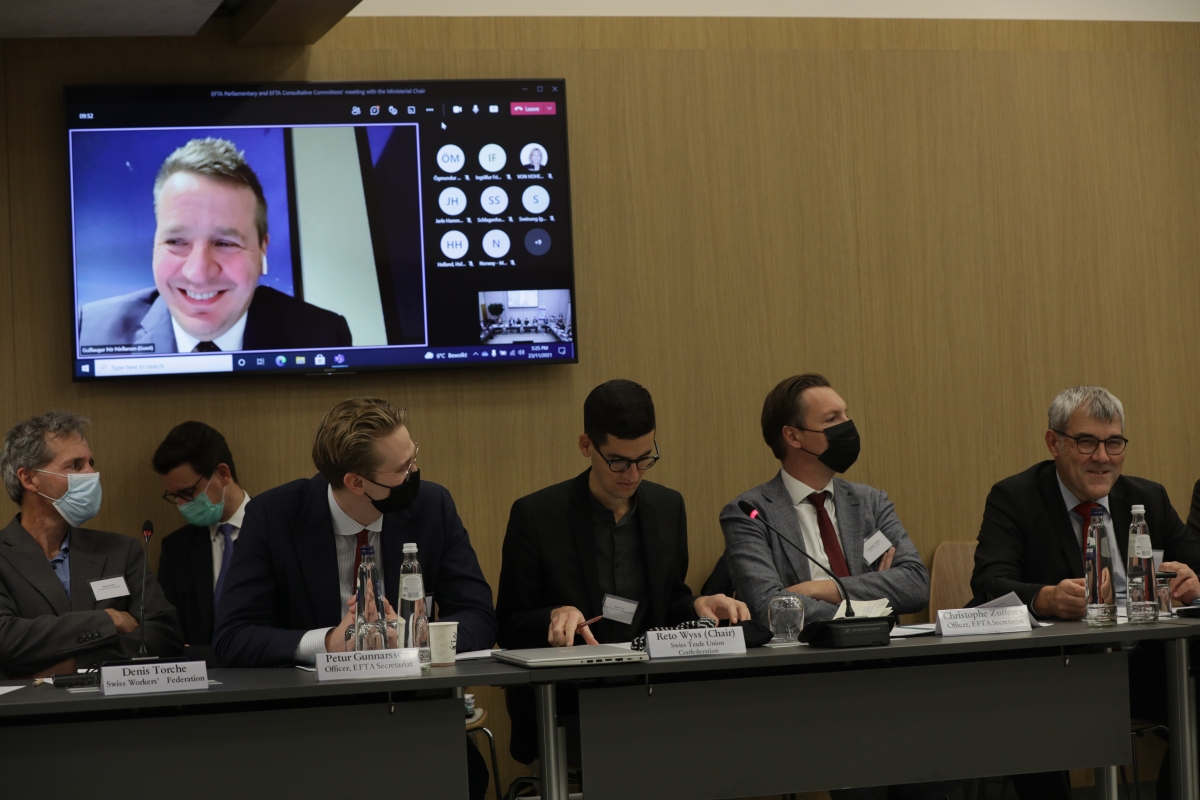 Due to Covid-measures, Ministerial Chair Guðlaugur Þór Þórðarson had to attend the meeting via videoconference.

The meeting was co-chaired by Eric Nussbaumer (the Swiss Parliament), Chair of the EFTA PC, and Reto Wyss (the Swiss Trade Union Confederation), Chair of the EFTA CC. The meeting provided the opportunity to discuss the priorities of the Icelandic EFTA Council chairmanship for the year to come. These included EFTA’s trade strategy with South-Eastern Asian countries, the latest developments of EFTA’s third-country relations and several horizontal issues relating to the transparency and the monitoring of EFTA free trade agreements.

“Amid the ongoing pandemic, global trade has been profoundly impacted and still needs to find a new impetus as the economy is recovering. In recent months, we have experienced supply chain disruptions and skyrocketing energy prices which pose challenges to a lasting and sustainable recovery” said Mr Nussbaumer in his introductory statement.

Outlining the priorities of his chairmanship, the Icelandic Minister said “We have an ambitious programme for the upcoming year. EFTA is a key platform for EFTA States’ trade policy, which we want to build on further.”

Parliamentarians and social partners also held a focussed discussion on EFTA’s trade strategy with South-Eastern Asian countries. They further took stock of other relevant third-country processes. They  were updated about recent horizontal developments such as on transparency of EFTA third-country relations, the utilisation rate of EFTA free trade agreements, monitoring the agreements and their trade and sustainable development chapters.

The EFTA CC Chair Reto Wyss, encouraged “the EFTA States to continue their modernisation of FTAs to include the new version of the trade and sustainable development chapters wherever possible”.

Both committees held their internal meetings earlier in the day. The EFTA PC welcomed the new members of the Norwegian parliamentary delegation who were appointed after the elections in Norway. They discussed the recent political developments in their countries, prepared their meeting with the EFTA Ministerial Chair, discussed their work programme for the first half of 2022. They were also briefed on the recently adopted EEA EFTA Comments on the Digital Services Act (DSA) and Digital Market Act (DMA).

The EFTA CC meanwhile met internally to discuss the state of play of the EFTA States’ economies in the context of COVID-19. Further, they had a dialogue on trade in services and EFTA FTAs and prepared for next year by discussing their work programme for 2022.

The EFTA PC and the EFTA CC are EFTA's advisory bodies. The EFTA PC is a forum of parliamentarians from the four EFTA countries, while the EFTA CC brings together representatives of the trade union confederations and employers’ associations in the four EFTA countries. The mission of both advisory bodies is to scrutinise and provide advice on the EFTA States’ trade relations with third countries as well as on the relations with the EU through the implementation of the EEA Agreement. Both advisory bodies are vital platforms for dialogue and consultation on social, economic, and political aspects of the EFTA free trade agreements and the functioning of the EEA.

Find photos from the meeting with the Ministerial Chair here.

Find photos from the internal meetings of the PC and CC here.