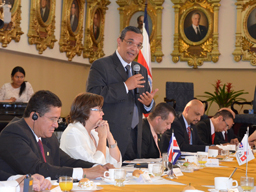 During its visit to Costa Rica and Panama from 20 to 25 January 2013, a delegation from the EFTA Parliamentary Committee discussed the merits of strengthened EFTA-Central American trade relations with legislators, officials and stakeholders, in support of the early conclusion and subsequent ratification of a free trade agreement (FTA) between the two sides.

The delegation was headed by Mr Árni Þór Sigurðsson, Member of the Parliament of Iceland. In talks between EFTA and speakers, committee members and factional chiefs of the parliaments of Costa Rica and Panama, the two sides underlined that their economies were of a complementary nature, and that enhanced access to each other’s markets would be mutually beneficial. They welcomed the rapid progress that had been achieved in the negotiations and looked forward to the conclusion and signing of the FTA by all partners, including Guatemala and Honduras.

The parliamentarians underlined the importance of environmental protection and the benefits of cooperation in areas such as sustainable energy and forest protection. Both sides welcomed the fact that environmental and social issues would be emphasised in the FTA.

The delegation also met with Vice President Luis Liberman and Vice Minister for Foreign Trade Fernando Ocampo in Costa Rica, and with Vice Minister for Commerce José Pacheco in Panama, to discuss, among others, international trade and the World Trade Organization.

The advantages of EFTA’s strengthened cooperation with Central America were further addressed in meetings with the leadership of the local chambers of commerce, as well as with EFTA business representatives in Costa Rica and Panama.