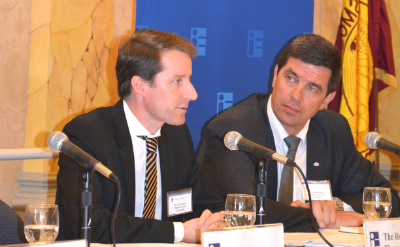 On 13 April 2015, members of the EFTA Parliamentary Committee participated in a panel debate in Washington to discuss the Transatlantic Trade and Investment Partnership (TTIP) negotiations between the EU and the US and the possible implications for the EFTA Member States.

The event, organised by The European Institute, a leading Washington based public policy organisation, focused its discussions on TTIP and the possible implications for the EFTA States.

A parliamentary dimension to the TTIP discussions

The panel debate was part of a two day working programme for the EFTA Parliamentary Committee that also included meetings with members of both the US Congress and the US Chamber of Commerce.

Ongoing TTIP negotiations have already been discussed between representatives from the EFTA governments and the US administration. In that context, the aim of this EFTA Parliamentary Committee delegation visit was to add a parliamentary dimension to this dialogue, and to raise awareness of the possible implications of the TTIP for the EFTA States.

By reducing tariffs and non-tariff barriers, as well as enhancing closer regulatory cooperation, the TTIP is expected to make business between firms on both sides of the Atlantic easier, and subsequently to increase overall trading activity.

It is therefore important to bear in mind the consequences for close trading partners of the EU and the US such as the EFTA States. For EFTA export industries, the TTIP might change the competitive situation. For example, EU exporters could benefit from better access to the US market than EFTA industries, whilst EFTA exports to the EU could face stronger competition.

The EFTA States might not only be affected by tariff reductions, but also by cooperation in developing regulations and setting of common standards.

Also, as participants in the EU's Single Market, the EEA EFTA countries may be affected by regulatory changes in areas such as trade in services, public procurement and company law. The parliamentarians underlined in the meetings that existing regulatory cooperation established under the EEA Agreement needs to be taken into account when negotiating regulatory cooperation for the TTIP, and encouraged the US side to keep the EFTA States regularly informed and updated on developments in the negotiations.