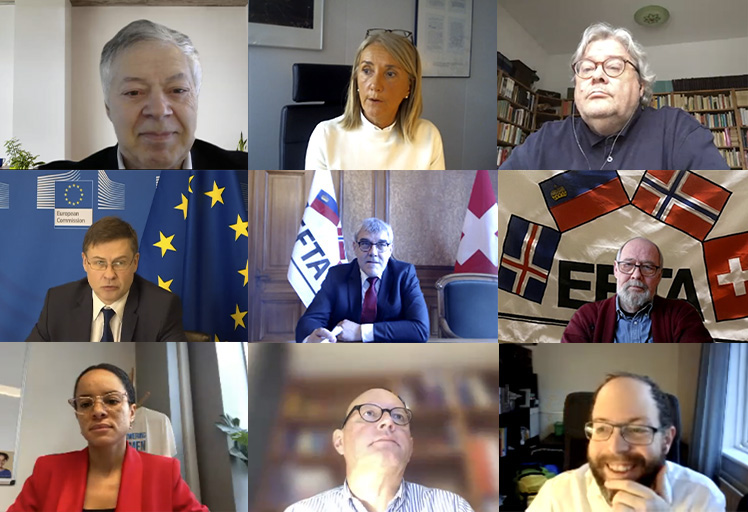 On 4 and 5 February 2021 the EFTA Parliamentary Committee convened via videoconference under the chairmanship of Eric Nussbaumer, Member of the Swiss Parliament. The parliamentarians gathered over two days to discuss the EU and EFTA trade policies amid the COVID-19 pandemic. In particular, they discussed recent developments such as the conclusion of the EU–UK Trade and Cooperation Agreement (TCA) and the EU–China Comprehensive Agreement on Investments (CAI).

The parliamentarians from Iceland, Liechtenstein, Norway, and Switzerland exchanged views with the Executive Vice President of the European Commission and Commissioner for Trade, Valdis Dombrovskis. A few months after taking over the trade portfolio, Executive Vice President Dombrovskis outlined the trade policy priorities of the European Commission in turbulent times.

With the Communication of the Commission outlining the EU’s new direction for trade and investment expected to be published later this month, Mr Dombrovskis opined that the meeting was taking place at the right moment. He presented the general approach of the new strategy centred around the concept of “open strategic autonomy”.“ The EU trade policy will remain open, fair and sustainable but at the same time it will need to operate on strong and appropriates rules leading to the reform of the World Trade Organization”, he said. The Trade Commissioner also explained the concept of trade being “strategic” which means using trade as a tool towards broader ambitions such as coping with the Green and Digital transitions. Furthermore, referring to the concept of “autonomy”, Mr Dombrovskis stressed that “the EU needs to be more assertive in the trade context by strengthening its trade defence and enforcement tools”. “We very much value our trade and political relationships with EFTA countries and we look forward to strengthening our ties to tackle global challenges”, he concluded.

The Committee also met with Samira Rafaela from the centrist Renew Europe group and Member of the Committee on International Trade who shared her views about current trade challenges.

“The COVID-19 pandemic has been a proper reality check for EU trade policy. To better prepare ourselves for the future of trade, the EU has to re-think the way it approaches trade in general” she stressed. In this regard, “the European Parliament is going to prepare an own-initiative report which will explore what the new realities mean for EU trade policy”, she added.

Following the recent conclusion of the Trade and Cooperation Agreement (TCA) between the EU and the UK, EFTA Parliamentarians exchanged views with Clara Martinez Alberola, Deputy Head of the European Commission’s Task Force for the relations with the UK.

“The TCA does not replace EU membership and it does not replace the access to the EU Internal Market. However, it is unprecedented and very ambitious on many aspects since it covers areas that were never covered with any other third country before”, she stressed.

The EFTA PC also held an exchange of views with Reinhard Bütikofer from the Greens/European Free Alliance (EFA) Political Group and Member of the Foreign Affairs Committee in the European Parliament. In his capacity as Chair of the European Parliament’s Delegation for the relations with China, he shared his – rather critical – views about the recently concluded Comprehensive Agreement on investments between the EU and China.

“Enforcement of the level playing field commitments is weak and will not satisfy us”, he said. Commenting on the trade and sustainability provisions of the deal, he described provisions on labour protection as “unacceptable”.

The Norwegian Ambassador to the WTO and EFTA and Chair of the EFTA Council for the first half of 2021, Dagfinn Sørli, briefed EFTA Parliamentarians about the priorities of the EFTA States for the months to come. Ambassadors from Iceland, Liechtenstein and Switzerland also contributed to the discussion.

The EFTA Parliamentary Committee is a forum for parliamentarians from the four Member States: Iceland, Liechtenstein, Norway, and Switzerland. The role of the Committee is to advise EFTA States on all issues relevant to EFTA such as its relations with trade partners worldwide.