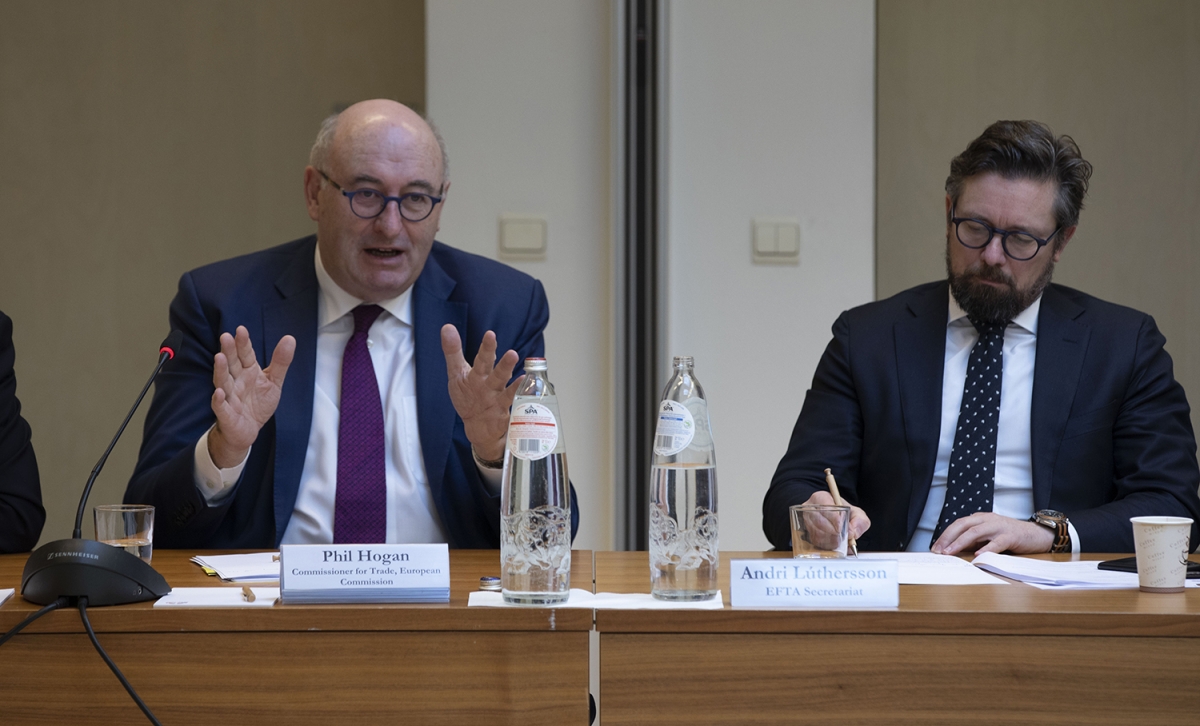 Phil Hogan, European Commissioner for trade, and Andri Lúthersson, EFTA Deputy Secretary-General.
On 4 February 2020 the EFTA Parliamentary Committee convened in Brussels under the chairmanship of Svein Roald Hansen, Member of the Norwegian Parliament. The parliamentarians gathered for a full day of meetings to discuss the EU and EFTA trade policies, the future relations with the United Kingdom (UK) and the multilateral trading system.

“We want to expand our alliances and conclude new deals giving opportunities to EU businesses while ensuring fair competition,“ he said. Making sure that trade ensures fair and non-discriminatory working conditions and safeguards the environment and the climate is a common ambition for both the EU and EFTA.

“We need to build a new approach to trade when it comes to sustainable goals and the new Green Deal. Companies must be held accountable with regard to social and environmental standards,” she said.

Karin Karlsbro, INTA coordinator for the centrist Renew Europe Group in the European Parliament said, “Our political group believes that trade is good for the European economy and its competitiveness but it is also a powerful tool to foster values and standards.”

As the UK had departed from the European Union and the European Economic Area (EEA) a few days before the meeting, the Committee discussed thoroughly the next negotiation phase to establish a new partnership with the UK. EFTA Parliamentarians exchanged views with Clara Martinez Alberola, Deputy Head of the European Commission’s Task Force for the relations with the UK.

“The free trade agreement will be the core element of the economic partnership. The EU wants to avoid unfair competition from the UK in the fields of state aid, taxation, social and environmental standards”, she said.

They also heard from her counterpart, Hermione Gough, Director for the UK-EU Partnership at the freshly renamed UK Mission to the EU who stressed that “the UK had made its choice and wanted a Canada-style free trade agreement with the EU and EFTA countries. Regulatory divergence does not mean lowering standards.”

The Committee discussed the multilateral trading system, the trade negotiations between the US and China and the ongoing talks to reform the World Trade Organization with several representatives of think tanks. They also exchanged views on the European Commission’s idea of possibly introducing a Carbon Border Adjustment Mechanism in order to prevent high-carbon products accessing the European market.

The EFTA Parliamentary Committee is a forum for parliamentarians from the EFTA countries. It scrutinises EFTA States’ policies as regards the relations with the EU (through the implementation of the EEA Agreement) and on the trade relations with third-country partners beyond the EU.

Find pictures from the meetings here.