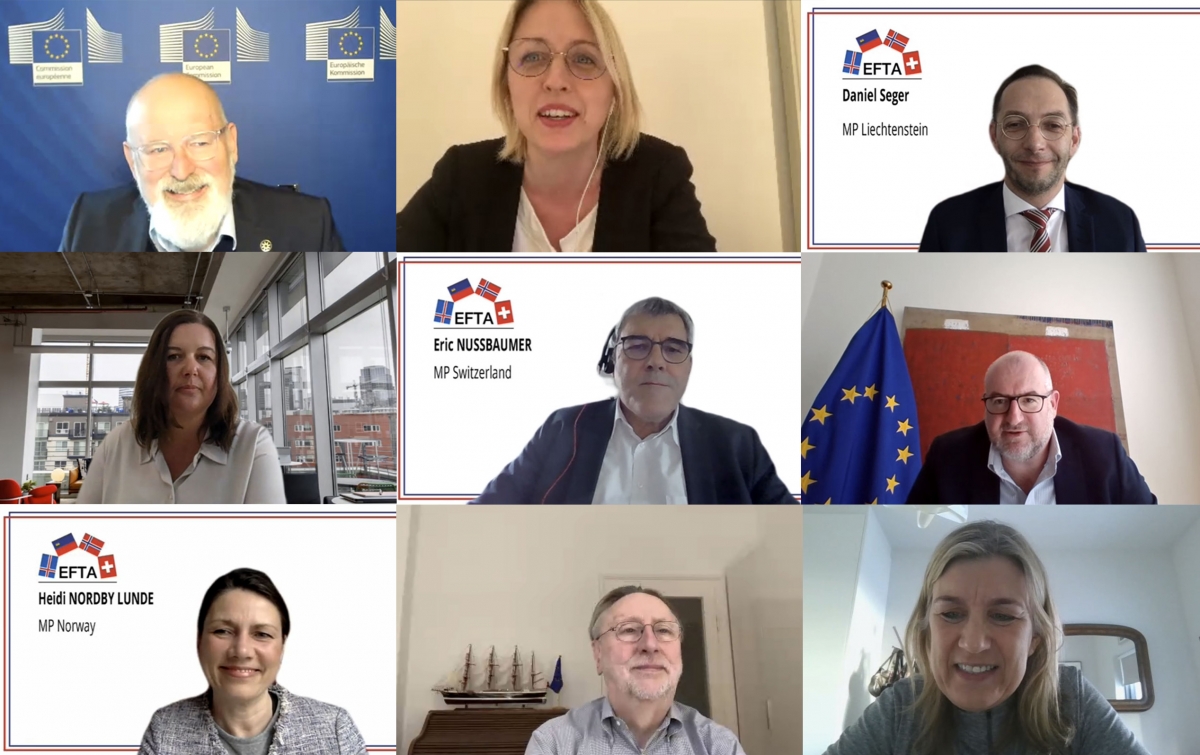 The parliamentarians from Iceland, Liechtenstein, Norway, and Switzerland exchanged views with the Executive Vice President of the European Commission and Commissioner for Climate Action, Frans Timmermans. The Chair stressed that “as EFTA countries have also embarked towards the green transition, our stable and solid relations will offer plenty of opportunities to cooperate and make the Green Deal happen at an extended European level”.

Mr Timmermans expressed his concern about the fundamental global changes we are facing. The fight against climate change should be led by the thought that “we need to prevent that our kids will have to fight wars for water and food in the future. Trade remains the cornerstone but needs to be fair and sustainable”, he said.

The Committee also met with Jytte Guteland, member of the European Parliament (EP) Committee on Environment, Public Health and Food Safety (ENVI) and EP rapporteur on the European Climate Law. “Our countries are very committed to the green transition and when it comes to reducing CO2 emissions, Iceland and Norway in particular are at the forefront”, Mr Nussbaumer said.

Referring to the interinstitutional negotiations, Ms Guteland stressed that the EP aims to anchor the Paris Agreement in the European Climate Law. For this reason, “the European Parliament would like to step up the ambition of the reduction target by 2030 from minus 55 to minus 60 compared to the level of 1990”, she said.

The Committee also held a session on enforcement of trade agreements and discussed the EU toolbox in this field. Denis Redonnet, the EU Chief Trade Enforcement Officer and two prominent members of the Committee on International Trade (INTA) in the EP, Marie-Pierre Vedrenne and Bernd Lange, Chair of the INTA Committee gave an address. “EFTA is currently emphasising the implementation and enforcement of its trade agreements and we therefore look forward to exchanging views with you on this important topic”, the Chair opined.

Mr Redonnet expressed “it is about unlocking the benefits of the trade agreement and making sure that they actually materialise for a large cross section of our stakeholders. It’s about addressing all kinds of barriers and non-compliance that we face, because the value of the agreement depends on its implementation.” On that matter, amongst the tools the EU is setting up, he presented the new single-entry point and complaints mechanisms for civil society to interact directly with the European Commission.

In a third session, the Committee discussed the outcome of the Swiss Referendum on the ratification of the EFTA–Indonesia Free Trade Agreement jointly with the EFTA Consultative Committee (CC), and Karin Büchel from the Swiss State Secretariat for Economic Affairs (SECO). Mr Nussbaumer said that “the narrow outcome demonstrates once again that citizens are sensitive about sustainability in general and the impact of trade on the environment”.

“We need to do a better job in demonstrating how important these agreements are and what they deliver”, Ms Büchel said. “We need to communicate better and show that these FTAs are not intended to achieve unrestricted liberalisation and that they are in no way aiming at dismantling standards or levels of protection”, she added. Regarding the issue of sustainability in free trade agreements, the EFTA advisory bodies were briefed by the EFTA Secretariat about current EFTA States initiatives in this field and the opportunity for undertaking sustainability impact assessments of EFTA free trade agreements in the future.

The EFTA CC also held their own session with Thomas Cottier, Professor Emeritus of European and International Economic Law at the University of Bern and member of the International Law Advisory Committee at the Centre for International Governance Innovation (CIGI). They discussed how sustainability can be more efficiently promoted through trade policy.

The EFTA Parliamentary Committee is a forum for parliamentarians from the four Member States: Iceland, Liechtenstein, Norway, and Switzerland. The role of the Committee is to advise EFTA States on all issues relevant to EFTA, such as its relations with trade partners worldwide or with the EU through the EEA Agreement.

The EFTA Consultative Committee is an advisory body that brings together representatives of employers’ associations and trade union confederations from the four EFTA countries.