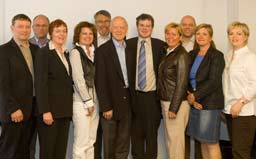 At its first meeting, held in Reykjavik on 22 June 2010, the EEA EFTA Forum of Local and Regional Authorities elected Mr Halvdan Skard, Municipality of Bærum, Norway, as its first Chair. Mr Skard is also President of the Norwegian Association of Local and Regional Authorities. He will be assisted by Mr Halldór Halldórsson, President of the Norwegian Association's sister organisation in Iceland, as Vice Chair of the Forum.

Established by a decision of the EFTA Ministers as an informal body to involve elected representatives from local authorities and regions in EEA matters, the Forum will seek cooperation with EFTA and EU bodies, and in particular the Committee of the Regions of the European Union, an EU advisory body that was established by the Maastricht Treaty in 2004 just after the signing of the EEA Agreement.

At the inaugural meeting, EFTA Deputy Secretary-General Bergdís Ellertsdóttir underlined that the establishment of the Forum was a logical development, as the municipal budgets and work are strongly influenced by EU legislation and programmes incorporated into the EEA Agreement. This was also voiced by other speakers at the meeting, who included Mr Árni Þór Sigurðsson and Mr Svein Roald Hansen, Chair and Vice Chair of the EFTA Parliamentary Committee, Ambassador Stefán Haukur Jóhannesson, Mission of Iceland to the EU and Vice Chair of the EFTA Standing Committee, and Mr Uno Aldegren, Deputy Governor of Skåne and Member of the Committee of the Regions.

The Forum has 12 members, six from Iceland and six from Norway. Liechtenstein has decided not to take part in the meetings for the time being.

Click below to open a gallery with more pictures from the inaugural meeting.