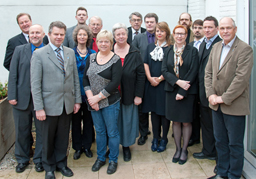 At its sixth meeting, which took place in Brussels on 26 and 27 November 2012, the EEA EFTA Forum of Local and Regional Authorities adopted three opinions: on labour migration within the EEA and its impact on the local and regional level, on the participation of the local and regional level in EEA EFTA States in the new generation of EU programmes, and on data protection reform.

Under the chairmanship of Mr Halldór Halldórsson, Iceland, the Forum discussed labour migration within the EEA and its impact on the local and regional level. Mr Laurent Aujean from the Employment Analysis Unit of DG Employment gave a presentation on labour migration trends in Europe, and Ms Elín Kjartansdóttir from the EFTA Secretariat gave a presentation on the work of EFTA in this field. Ms Hanne Braathen, Storfjord Municipal Council, then presented a draft opinion on the topic, which was adopted by the Forum.

The Forum also held a discussion on European programmes 2014-2020, where Mr Tore Grønningsæter, Senior Information Officer at the EFTA Secretariat, gave a presentation on the EEA EFTA States’ participation in European programmes. The presentation was followed by a debate and the adoption of an opinion prepared by Mr Óttarr Ólafur Proppé, Reykjavik Municipal Council, Iceland.

The Forum then met with the EFTA Parliamentary Committee, where the discussions centred on labour migration and participation of the EEA EFTA States in European programmes, and the opinions, resolutions and reports of the respective bodies on these topics.

The third substantive issue discussed at the meeting was the new proposal by the European Commission for a regulation on data protection. Mr Henrik Rainio, Director of the Brussels Office of the Association of Finnish Local and Regional Authorities, gave a presentation on the new proposal and the concerns of the local and regional authorities. The presentation was followed by a debate and the adoption of an opinion prepared by Mr Nils A. Røhne, Mayor of Stange Municipality, Norway.

The Forum also heard presentations by Mr Lars Erik Nordgaard, Director of the EEA Coordination Division of the EFTA Secretariat, who gave an overview of recent developments in EFTA, and by Mr Roland Krimm, Representative of the Swiss Cantons, on current discussions on Swiss-EU relations. Ms Catarina Segersten Larsson, Member of the Committee of the Regions, then updated the Forum on recent developments in the Committee of the Regions and her work on public procurement.

The EEA EFTA Forum was set up by a decision of the Standing Committee of the EFTA States as an informal body to involve elected representatives from local and regional authorities in EEA matters. The Forum has 12 members, six from Iceland and six from Norway. Liechtenstein has decided not to take part in the meetings for the time being.

The agenda for the meeting is available here.

Click here for high quality pictures from the meeting.