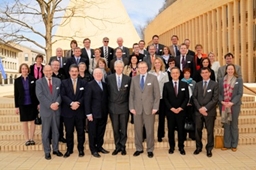 On 29 and 30 March, parliamentarians from the three EEA EFTA States and the European Parliament met in Vaduz, Liechtenstein, for the 34th EEA Joint Parliamentary Committee meeting. At the meeting, which was observed by a delegation from the Swiss Parliament, the Committee discussed a number of topical issues and adopted three resolution texts.

First, the Committee adopted a resolution on the functioning of the EEA in 2009 which, among other things, encouraged the EEA EFTA States to follow closely developments in European Financial Supervision, and urged the relevant EU institutions to secure the EEA EFTA States’ participation in the new Supervisory Authorities for Banking, Securities and Insurance Sectors and in the European Systemic Risk Board. In this resolution the Committee also welcomed the EEA Joint Committee Decisions on the EEA EFTA States’ participation in several new and important agencies and programmes, including the Galileo and EGNOS programmes, the Galileo Supervisory Authority and the Modernisation of European Enterprise (MEETS). Mr Harry Quaderer (Patriotic Union, Liechtenstein) and Ms Zuzana Brzobohatá (S&D, Czech Republic) were co-rapporteurs of this resolution.

The third resolution adopted at the meeting was on the Reform of the EU Common Fisheries Policy (CFP) and the EEA, co-written by Mr Harald T. Nesvik (Progress Party, Norway) and the President of the Committee, Mr Pat the Cope Gallagher (ALDE, Ireland). In this resolution the Committee stressed that the main objective of the Common Fisheries Policy should be to guarantee the future of both fisheries resources and fishermen by ensuring the recovery of fish populations and restoring the economic viability of the sector. The Committee also underlined the importance of making the fisheries economically self-reliant and stressed that compliance was a fundamental issue in any fisheries management and that a reform of the CFP would be in vain unless the new rules were implemented effectively and complied with. In the resolution, the EEA JPC urged stakeholders to ensure that discarding, which not only had been authorised but mandatory, would no longer take place and underlined that to address the problem of discards, the system should provide for some flexibility. The Committee’s resolution also stressed that historic rights have previously been protected by the principle of relative stability and that any new management regime should retain the benefits to coastal communities that have accrued from relative stability, and emphasised that any new management model should build on the existing arrangements based on relative stability.

During the meeting the Committee also had an exchange of views with representatives from the EEA Council, the EEA Joint Committee and the EFTA Surveillance Authority: Prince Nikolaus von Liechtenstein, Chairman of the EFTA Standing Committee, Mr Thomas Näcke, Chargé d’Affaires a.i., EU Delegation for Switzerland and Liechtenstein, Mr Lars-Olof Hollner of the European Commission, and Mr Per Sanderud, President of the EFTA Surveillance Authority. The Committee also had an exchange of views on present and future challenges in the EEA financial services sector with Ms Katja Gey from the Prime Minister’s Office in Liechtenstein and Mr Mike Lauber, Head of the Liechtenstein Financial Market Authority. The 34th EEA JPC was co-chaired by the President, Mr Pat the Cope Gallagher, and the Vice-President, Mr Árni Thór Sigurdsson (Left-Green Movement, Iceland).

The Committee decided to hold its next meeting in November during the plenary session in Strasbourg. At that meeting the Committee will devote its work to the Europe 2020 Strategy, the European Year against Poverty and Social Exclusion, and the effects of the Lisbon Treaty on the EEA, and will discuss trade in seal products and the EEA.

You can find the resolutions adopted at the 34th meeting here. 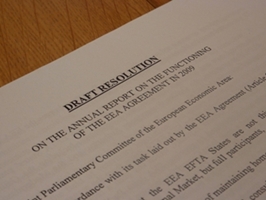