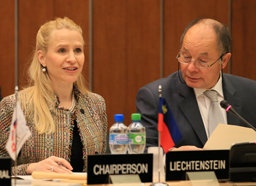 On 18 November 2013, the European Free Trade Association (EFTA) held its biannual Ministerial Meeting in Geneva. The meeting was chaired by Ms Aurelia Frick, Minister of Foreign Affairs of Liechtenstein. The EFTA Ministers met with the Undersecretary for Industry Development and Trade Policy of the Philippines, Mr Adrian S. Cristobal Jr, to discuss options for developing closer trade relations between the two sides.

Ministers discussed the prospects for the global economy, stressing the importance of pursuing long-term growth strategies based on liberal trade and investment policies. In this context, they expressed strong hope that WTO Members would deliver tangible results at the Ninth WTO Ministerial Conference, taking place in December in Bali, Indonesia. They also exchanged views on the ongoing negotiations between the European Union and the United States on a Transatlantic Trade and Investment Partnership.

Ministers reviewed the state of affairs in EFTA’s free trade relations. They welcomed the positive developments in the free trade negotiations with India and looked forward to their timely conclusion. Ministers noted the progress made in the negotiations with the Customs Union of Russia, Belarus and Kazakhstan and exchanged views on how to advance this process to its closing stages. They reviewed developments in the negotiations with Indonesia and Vietnam, reiterating their commitment to these processes. They noted the positive engagement with Guatemala and discussed the prospects for that country joining the EFTA-Central America Free Trade Agreement. Ministers look forward to starting negotiations on a free trade agreement with Malaysia early next year. Welcoming Thailand’s readiness to resume free trade negotiations, they looked forward to the organisation of a first round in early 2014.

Ministers reaffirmed EFTA’s interest in developing closer trade relations with potential partners in Sub-Saharan Africa and with the Philippines. They agreed to continue evaluating the potential for developing preferential trade relations with the MERCOSUR States and with Pakistan and for resuming free trade negotiations with Algeria. They also exchanged views on the prospects for extending EFTA’s free trade network in the broader European neighbourhood and for updating and further developing existing free trade agreements, notably the agreements with Canada and Turkey.

EFTA’s network of preferential trade relations outside the European Union currently comprises 25 free trade agreements with 35 countries and territories. This network is complemented by 6 joint declarations on cooperation.

Ministers met with the EFTA Parliamentary Committee to discuss recent developments and priorities in EFTA’s trade relations with the world.

High resolution photos can be found at photos.efta.int