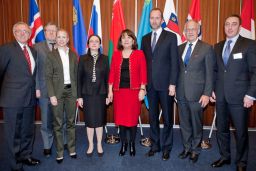 On 23 November 2010, the European Free Trade Association (EFTA) held a Ministerial meeting in Geneva under the chairmanship of Mr Johann N. Schneider-Ammann, Federal Councillor and Head of the Federal Department of Economic Affairs of Switzerland. Ministers from the four EFTA Member States were joined by Ms Elvira Nabiullina, Minister of Economic Development and Trade of the Russian Federation, Mr Nikolai Snopkov, Minister of Economy of the Republic of Belarus, and Ms Zhanar Aitzhanova, Minister of Economic Development and Trade of the Republic of Kazakhstan, for the official launch of negotiations on a broad-based free trade agreement.

The EFTA Ministers discussed the current state of the global economy and welcomed the strong rebound in global trade flows. They reiterated EFTA’s commitment to the multilateral trading system and highlighted the role played by free trade agreements in contributing to reinforcing liberalisation globally. The EFTA Ministers supported the strong commitment expressed by G20 leaders to use the window of opportunity in 2011 to bring the Doha Round to a successful and balanced conclusion. The Ministers underlined the need to expeditiously translate this commitment into an intensified engagement to complete the Round.

Launching of negotiations with Russia, Belarus and Kazakhstan

The EFTA Ministers and Ministers from Russia, Belarus and Kazakhstan signed a Joint Statement on the launching of negotiations on a broad-based free trade agreement, mandating their representatives to enter into a formal process from January 2011. The Ministers expressed their expectation that a free trade agreement would advance the economic relationship between the parties by further developing trade and investment flows. In 2009, Russia, Belarus and Kazakhstan together were EFTA’s fifth most important export destination and fourth largest import source outside the European Union, with total merchandise trade amounting to USD 6.2 billion in that year.

The EFTA Ministers reviewed the state of and outlook for preferential trade relations with partners worldwide. They noted the progress achieved in negotiations with Hong Kong, China, and expressed the hope that these could be concluded in a timely manner. Ministers welcomed the recent advances made in talks with India, emphasising the importance of India as a future free trade partner for the EFTA States. They expressed their satisfaction with the work undertaken by the EFTA-Vietnam Joint Study Group and looked forward to receiving its conclusions in the first quarter of 2011.
Ministers welcomed the start of a negotiation process with Indonesia in early 2011. They reviewed the preparations for free trade negotiations with Bosnia-Herzegovina and with Montenegro, with a view to opening negotiation processes in the course of next year.

Ministers expressed their interest in strengthening economic cooperation and further promoting trade and investment relations with Malaysia in the framework of the Declaration on Cooperation signed in July. They agreed to start exploring, in the first half of 2011, the possibility of establishing closer trade relations with a group of Central American States (Costa Rica, El Salvador, Guatemala, Honduras, Nicaragua and Panama). Ministers furthermore concurred to follow developments in Algeria and Thailand with a view to resuming negotiations with those partners when conditions allow.

High definition pictures from the meeting can be found here.