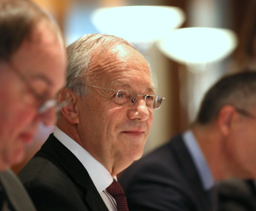 On 17 November 2014, the European Free Trade Association (EFTA) held its biannual Ministerial Meeting in Geneva. The meeting was chaired by Mr Johann N. Schneider-Ammann, Federal Councillor, Head of the Federal Department of Economic Affairs, Education and Research of Switzerland.

The EFTA Ministers welcomed the announcement of a breakthrough between India and the United States which paves the way for the implementation of the Trade Facilitation Agreement and the rest of the Bali package. This development represents a significant step in efforts to restore confidence in the multilateral trading system.

The EFTA Ministers met with Ms Maria Luisa Flores, Vice Minister of Economy of Guatemala, to discuss the development of closer trade relations between the two sides in view of Guatemala's forthcoming accession to the EFTA-Central America Free Trade Agreement. Together with Ambassador Ronald Saborío Soto (Costa Rica) and Ambassador Alfredo Suescum (Panama) they welcomed the conclusion, in substance, of free trade negotiations with Guatemala in October 2014. The EFTA Ministers also met with Ambassador Michael Punke, Deputy U.S. Trade Representative to pursue a trade policy dialogue with the U.S. and exchange information on the status of negotiations between the U.S. and the European Union on a Transatlantic Trade and Investment Partnership.

Ministers took stock of the state of play in EFTA's free trade negotiations with India and confirmed their readiness to conclude talks as soon as possible. With regard to the negotiations with Indonesia, they expressed their willingness to move forward at the earliest opportunity. They reviewed progress to date in the negotiations with Malaysia and Vietnam and reaffirmed EFTA's commitment to advancing these talks. They also noted that the negotiating process with the countries of the Customs Union of Russia, Belarus and Kazakhstan remains on hold. Ministers agreed to continue evaluating the situation for a possible resumption of the processes with Algeria and Thailand.

Ministers expressed satisfaction with the imminent start of negotiations on a free trade agreement with the Philippines and expressed their intention to start negotiations with Georgia within a timeframe to be agreed upon. They agreed to explore the possibility of further developing trade relations with MERCOSUR. They also expressed support for formalising cooperation with Ecuador through the signing of a joint declaration. Furthermore, they reiterated their interest in developing a closer relationship between EFTA and ASEAN. Ministers expressed interest in exploring the strengthening of ties with the EAC – the East African Community – as well as with individual countries in Sub-Saharan Africa, such as Nigeria.

Ministers stressed the importance of updating and further developing existing trade agreements. In this context, they welcomed the work undertaken so far on the expansion of the free trade agreement with Turkey. They also agreed to continue exploring options for expanding the existing FTAs with other partners, such as Canada and Mexico.

EFTA's network of preferential trade relations outside the European Union currently comprises 25 free trade agreements with 35 countries and territories. This network is complemented by 7 joint declarations on cooperation.

High resolution pictures from the meeting can be found here. 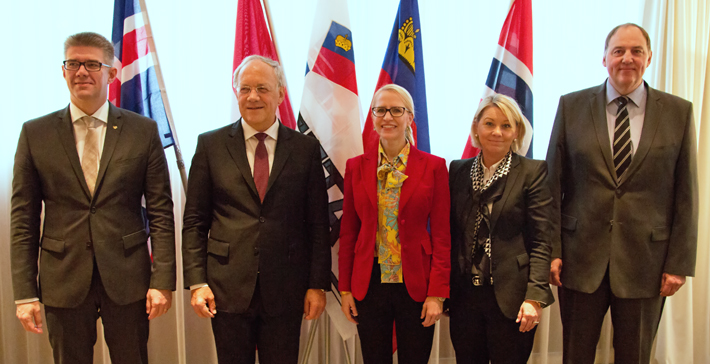