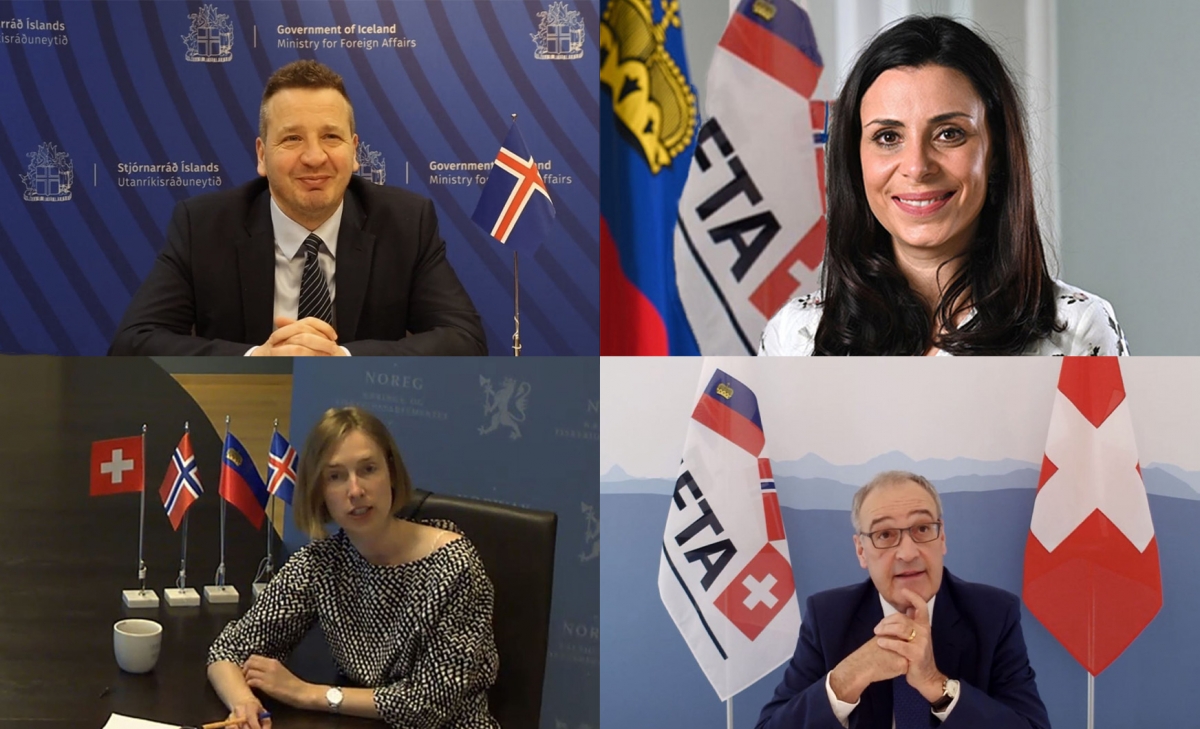 Ministers from Iceland, Liechtenstein, Norway and Switzerland met on 31 May 2021 under Norwegian chairmanship through video conferencing for the annual EFTA Ministerial meeting.

On the occasion of the 30th anniversary of the EFTA Statistical Office (ESO), Ministers highlighted the good work and cooperation in the field of statistics both with Eurostat as well as when it comes to technical cooperation in this field with third countries.

Ministers emphasised the need to maintain and strengthen the rules-based trade system to help global trade recover from the effects of the Covid-19 pandemic, emphasising that global prosperity based on mutual interdependence relies on a fair, consistent and open set of rules.

Furthermore, Ministers recognised that the legitimacy of trade agreements is not only dependent on the economic benefits of increased market access, but also requires due regard to sustainable development,  when it comes to the environment, human and labour rights as well as to gender and inclusive trade policies. Ministers announced that efforts to include these aspects in all trade agreements will continue along with increased monitoring of the implementation of both market access and sustainable development provisions in existing agreements.

Ministers reiterated the commitment of Member States to ensure transparent and inclusive conduct of EFTA’s trade negotiations by implementing transparency measures recently decided, both through new efforts aimed at the public and through increased exchange of information with the EFTA Advisory Bodies.

Ministers noted with pleasure the successful start of negotiations on a free trade agreement with Moldova, which will help complete EFTA’s network of agreements in Europe, and promote closer integration of Moldova in the wider European economy. EFTA Ministers confirmed their willingness to further develop their trade relations in the continent by launching negotiations with Kosovo in the second half of the year.

The progress made in the modernisation process with Chile was welcomed by Ministers, who aim at concluding it soon. Furthermore, Ministers expressed the aim to finalise the agreement with Mercosur, and agreed to follow up on issues related to deforestation and climate change. In Asia, EFTA Ministers welcomed the resumption of negotiations with Malaysia, and confirmed their will to strengthen cooperation with ASEAN through a Joint Declaration of Cooperation. Furthermore, Ministers emphasised their wish to relaunch negotiations with Thailand as soon as possible and underlined their willingness to continue the negotiations with India and Vietnam.

EFTA Ministers have decided to further strengthen the cooperation between their countries by exchanging information whenever issues arise with trade partners, coordinating positions on trade and economic issues whenever appropriate and by assessing possible joint actions. EFTA Ministers have adopted a Ministerial Declaration to this regard.

EFTA Ministers met on the same day in a joint meeting with the EFTA Parliamentary and the EFTA Consultative Committee. The parliamentarians from the four EFTA States together with the representatives from trade unions and employers’ organisations from the four EFTA States met with EFTA Ministers to discuss EFTA’s trade policy in general, and in particular how to improve transparency and the flow of information to ensure that the Advisory Bodies are given the opportunity to provide timely and well-informed input in EFTA’s work.

Discussions were also held on efforts to improve the monitoring and the implementation of Trade and Sustainable Development provisions in Free Trade Agreements as well as EFTA States’ relations with other countries, including the UK.

Ministers were determined to continue the close cooperation with the EU on COVID-19 related measures to ensure a level playing field and coherence of the Internal Market. In this context, they agreed on the particular importance of an efficient roll-out of vaccines as well as facilitating free movement during the COVID-19 pandemic, including through the upcoming COVID-19 certificate.

Ministers noted that the backlog of acts awaiting incorporation into the EEA Agreement remained relatively high but welcomed that the situation had improved in 2021. They stressed the importance of legal certainty and homogeneity in the EEA and confirmed the EEA EFTA States commitment to doing their part in ensuring a swift incorporation of EEA relevant legal acts into the EEA Agreement.

Ministers furthermore discussed the participation of the EEA EFTA States in relevant EU programmes in the 2021-2027 period. They confirmed their commitment to meeting the tight deadline for the adoption of decisions, incorporating the programme regulations. Ministers also underlined the importance of the EEA EFTA States being included in the early and preparatory stages of the relevant programmes.

In light of recent incidents where EEA EFTA States were unduly affected by some urgent decisions by the EU, Ministers concluded that there was a continued need for outreach activities in order to strengthen knowledge of the EEA Agreement.

Finally, the Ministers took note of the upcoming negotiations on the EEA and Norway Financial Mechanisms and the need to continue preparations.

Ministers were informed by Switzerland on the state and prospects of the relations between Switzerland and the European Union. Regarding the institutional framework agreement (IFA) with the EU, on 26 May 2021 the Swiss government carried out a comprehensive assessment of the draft agreement. It came to the conclusion that the draft IFA does not satisfy the requirements which would enable the Federal Council to sign and decided to terminate the ongoing negotiations. As the Swiss government pointed out, even without this agreement, Switzerland remains a reliable and committed partner of the EU.