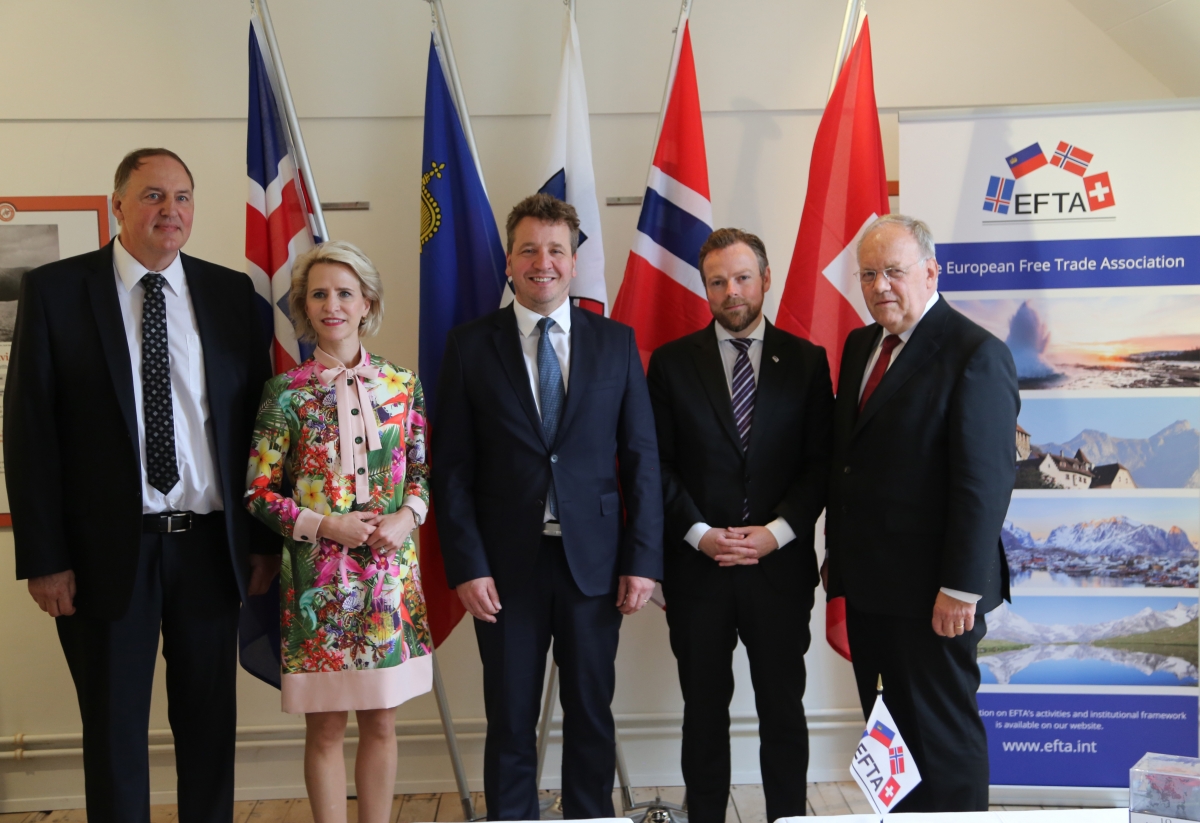 Ministers of the four EFTA States, Iceland, Liechtenstein, Norway and Switzerland, signed a Free Trade Agreement (FTA) with Ecuador, represented by H.E. Pablo Campana Sáenz, Minister of Foreign Trade of Ecuador. The signing, only two years after the launch of negotiations at the EFTA Ministerial Meeting in Bern in 2016, will strengthen economic relations between the EFTA States and Ecuador and give economic actors on both sides increased trade and investment opportunities.

Concurrently, the EFTA Ministers signed an enhanced and updated FTA with Turkey, represented by H.E. Nihat Zeybekci, Minister of Economy of Turkey. The current EFTA-Turkey Agreement, signed in 1991, is EFTA’s oldest existing FTA. After four years of negotiations, the modernised and enhanced Agreement will include updated provisions in areas such as intellectual property rights and extend to new topics such as trade in services, trade facilitation and trade and sustainable development.

The international economic and trade environment

Ministers reiterated their commitment to open trade on the basis of a rules-based, transparent and inclusive multilateral trading system. They expressed their concern about increased friction, unilateralism and risk of protectionism in international trade, stressed the importance of a well-functioning World Trade Organization (WTO) and the need to solve any disputes that may arise effectively within the WTO framework.

Ministers took stock of EFTA’s activities in relation to the development and modernisation of existing FTAs. In particular, they expressed their satisfaction with the start of negotiations with the Southern African Customs Union (SACU) and reviewed the state of play of the exploratory discussions with Canada as well as the negotiations with Mexico. They further conveyed their hope that negotiations with Chile could commence swiftly.

The Ministers welcomed the recent meeting of the EFTA-US Trade Policy Dialogue, took note of the discussions held and expressed support for the continuation of the Dialogue.

The Ministers welcomed the outcome of the recently held Joint Committee under the Joint Declaration with Moldova and expressed their readiness to strengthen trade relations further. They supported the continuation of discussions with Pakistan, with a view of exploring the possibility of future free trade negotiations. The Ministers also supported the preparation of a JDC with Kosovo as a first step to strengthen relations with this partner. Furthermore, they recalled their long-standing interest in strengthening ties with partners in Sub-Saharan Africa and ASEAN.

EEA EFTA Ministers took stock of recent developments in the Agreement on the European Economic Area (EEA Agreement) and discussed the challenges ahead in the cooperation between the EU and the EEA EFTA States.

Ministers noted with satisfaction that significant progress had been made across a number of important files since their meeting in June 2017, welcoming in particular the progress made with regard to acts in the field of financial services.

In this regard, Ministers welcomed the adoption of EEA Joint Committee Decisions related to Undertakings for Collective Investment in Transferable Securities (UCITS), the Bank Recovery and Resolution directive (BRRD), Solvency II and Omnibus I. However, Ministers highlighted the need for further progress on the remaining large number of outstanding acts in this field.

Ministers also appreciated the efforts made to contribute to the development of EEA-relevant policy and legislation at an early stage, including by submitting EEA EFTA Comments to EU proposals.

Moreover, Ministers welcomed the progress made in implementing the EEA Financial Mechanism for 2014-2021, which entered into force in September 2017, noting that 12 out of 15 Memoranda of Understanding had so far been signed with Beneficiary States, and that the first calls for proposals had been opened.

With regard to future challenges in EEA cooperation, Ministers focused on the implications of the UK’s withdrawal from the EU for the EEA Agreement. They welcomed the continuation of the regular dialogue with the EU Task Force on the margins of the EEA Council on 23 May 2018, underlining the need for a close dialogue and continuous exchange of information with the EU and the UK on this matter.

Ministers were informed by Switzerland on the state and prospects of the relations between Switzerland and the European Union. The Swiss government is negotiating an agreement on the institutional mechanisms of mutual market access with the EU. Switzerland aims at consolidating and further developing its bilateral relations with the EU.

Relations with the UK

EFTA Ministers discussed the implications of the United Kingdom leaving the European Union (EU), and consequently the European Economic Area (EEA), as well as arrangements under the bilateral agreements between Switzerland and the EU.

The UK is a major trading partner of all EFTA States, and the Ministers reiterated their willingness to preserve the current close trade relations between the EFTA States and the United Kingdom and expressed their determination to participate in transitional arrangements until a permanent framework for future trade relations with the UK can be agreed. The EFTA States will continue to consult with each other to help achieve this goal.

Ministers held meetings with EFTA’s two advisory bodies, the Consultative Committee and the Parliamentary Committee. They discussed recent developments in the EEA and the overall functioning of the EEA Agreement, third-country relations, and the relationship between Switzerland and the EU.

Click here for high-resolution photos from the Ministerial meeting.