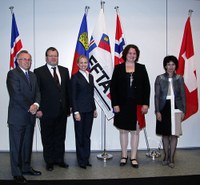 The EFTA Ministers signed a Free Trade Agreement with the Gulf Cooperation Council (GCC). They welcomed the ratification of the Free Trade Agreement with Canada and the recent signing of a Joint Declaration on Cooperation with Mauritius. Ministers welcomed the start of negotiations with Ukraine, Serbia and Albania. Ministers noted the recent steps taken to prepare for negotiations of an FTA between the EFTA States and Russia, and agreed to assess the feasibility of launching such negotiations in the second half of 2009. They decided to open free trade negotiations with Hong Kong and to examine, jointly with Vietnam, the feasibility of a free trade agreement. The EEA EFTA Ministers welcomed the inclusion of the European Institute of Innovation and Technology and the Services Directive into the Agreement. They complimented the successful round-up of commitments under the EEA and Norwegian Financial Mechanisms 2004-2009, and underlined the importance of finalising the ongoing negotiations on the future financial contributions as soon as possible.

On 22 June 2009, the European Free Trade Association (EFTA) held its Summer Ministerial meeting in Hamar, Norway, chaired by Sylvia Brustad, Minister of Trade and Industry of Norway. Ministers from the four EFTA States (Iceland, Norway, Liechtenstein and Switzerland) together with Sheikh Ghazi Bin Said Al Bahar Al Rawas, on behalf of the Omani Presidency of the Ministerial Council of the Gulf Cooperation Council (GCC), and Abdulrahman Bin Hamad Al-Attiyah, Secretary-General of the GCC, signed the EFTA-GCC Free Trade Agreement. In addition to Oman, the Gulf Cooperation Council is composed of Bahrain, Kuwait, Qatar, Saudi Arabia and the United Arab Emirates.

The international economic situation
The EFTA Ministers expressed concern over the global economic and financial crisis which has triggered an alarming fall in international trade and investment. They also regretted the emergence of trade-restrictive measures which have the potential to exacerbate the crisis and counteract efforts by governments to stimulate economic growth through national as well as international policies. The Ministers expressed their commitment to refrain from raising new barriers to investment or to trade in goods and services, to refrain from imposing new export restrictions, and to minimize any negative impact on trade and investment of domestic policy actions including fiscal policy and action in support of the financial sector. They recalled the critical importance of concluding the Doha Round and of building upon the WTO acquis to stimulate global economic recovery.

Preferential trade relations
The EFTA Ministers acknowledged the good functioning of the EFTA Convention governing trade relations among the four Member States. They welcomed the addition of the Free Trade Agreement (FTA) with the GCC to the expanding EFTA network of preferential trade relations. Covering trade in goods as well as services and government procurement, the new agreement will strengthen bilateral trade and investment relations with the Middle East. EFTA has now concluded 18 FTAs with 27 countries.

Ministers noted with satisfaction that the ratification of the FTA with Canada had been completed, paving the way for its entry into force on 1 July 2009. Ministers also welcomed the signing of a Joint Declaration on Cooperation with Mauritius on 9 June 2009.
Ministers commended the latest steps taken towards finalizing the EFTA-Peru FTA, and expect this to be ready for signing in the near future. They also expressed their satisfaction at the progress achieved in the ongoing EFTA-India negotiations on a broad-based FTA, launched in October 2008 and reiterated their willingness to aim for a swift conclusion. Ministers welcomed the start of negotiations with Ukraine and Serbia in April 2009 and with Albania in May 2009. With Ukraine, the objective is a comprehensive agreement covering, inter alia, trade in goods and services, investment and intellectual property rights. With Serbia and Albania, the focus lies on the liberalisation of trade in goods.

Ministers noted the recent steps taken to prepare for negotiations of an FTA between the EFTA States and Russia, and agreed to assess the feasibility of launching such negotiations in the second half of 2009.

Ministers stressed the importance to advance relations with important economic partners in South-East Asia. They agreed to open negotiations on a broad-based free trade agreement with Hong Kong and to establish a Joint Study Group with Vietnam to examine the feasibility of a free trade agreement. Ministers recalled that EFTA has maintained contacts with Indonesia in view of launching free trade negotiations in the near future. They also welcomed the preparations for a Joint Declaration on Cooperation with Malaysia.

In addition, Ministers took note of the situation in the negotiations with Algeria and stated their readiness to resume talks with Thailand. They exchanged information about the status of individual EFTA States’ bilateral processes with China and Japan.
Ministers welcomed the progress report prepared by the ad hoc Working Group on Trade and Environment and the interim report from the ad-hoc Working Group on Labour Standards in EFTA Free Trade Agreements. The Ministers underlined the importance of these EFTA working groups in order to contribute to international developments in these fields.

Relations with the European Union
Ministers underlined the need for coordinated and comprehensive action to restore the global economy. They stressed the importance of promoting synergy, solidarity and cooperation at European level and that the main priorities have to be to strengthen the financial system with an appropriate degree of regulation, based on the principle of transparency.

The EEA EFTA Ministers reiterated the importance of the Climate and Energy Package agreed by the EU in December 2008. Ministers welcomed the continuous close co-operation with the EU in the area of energy and climate change, especially on the emission trading scheme, in promoting energy technology and energy efficiency, on the increased use of renewable energy resources and of carbon capture and storage (CCS).

Ministers noted with satisfaction the incorporation of the following legislative acts into the EEA Agreement:

Ministers welcomed the participation of the EEA EFTA States in EEA relevant EU Programmes. With many of the programmes emphasizing creativity and innovation, the programmes promote common interests towards a more competitive and innovative Europe and play a significant role in Europe’s economic recovery. They highlighted in particular the importance of the European Year of Creativity and Innovation 2009.

Ministers reaffirmed the importance of the EEA EFTA contributions to the decision-shaping process of EEA relevant EC legislation and programmes through their participation in relevant committees, expert groups and agencies and by submitting EEA EFTA Comments. In this context, Ministers noted that due to institutional developments within the EU, special focus should be on how to adapt the decision shaping to these new forms of governance and on ensuring continued appropriate access of the EEA EFTA States to relevant programmes and agencies.

Ministers expressed their satisfaction with the successful round-up of commitments under the EEA and Norwegian Financial Mechanisms 2004-2009. By the 30 April 2009 deadline, around 1100 projects, programmes and funds had been approved.

On the future of the financial contributions Ministers welcomed the progress made and underlined the importance of finalising these negotiations as soon as possible.

Advisory Bodies
Ministers held meetings with EFTA’s two advisory bodies which are actively engaged in EFTA’s work: the Parliamentary Committee and the Consultative Committee, which represents the social partners in the EFTA countries. They had a fruitful exchange of views with committee members on a range of issues including the most recent developments in EFTA third country relations and the latest developments in the EEA and in Swiss-EU relations.