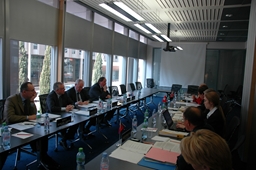 On 15 March the EFTA Council met for its second meeting of 2010, chaired by Iceland. The agenda included a review of ongoing free trade negotiations with Ukraine, EFTA's anniversary celebrations in May and preparations for the Ministerial meeting in Reykjavik in June.

The Council discussed relations with non-EU countries, notably the fourth round of negotiations with Ukraine held in Kyiv in February. The Council also adopted the EFTA-Eurostat cooperation projects in statistics for 2010, including training courses for statisticians from the Western Balkans, Turkey and Ukraine.

Discussions took place regarding the EFTA Ministerial meeting in Reykjavik from 24 to 25 June, at which Ministers will highlight the work of the Association on the occasion of its 50th anniversary. The Secretary-General informed the Council of a celebration planned for 3 May in Geneva, where EFTA's headquarters are located, as well as special events planned in Mexico and the Republic of Korea.

The next Council meeting will take place on 16 April.