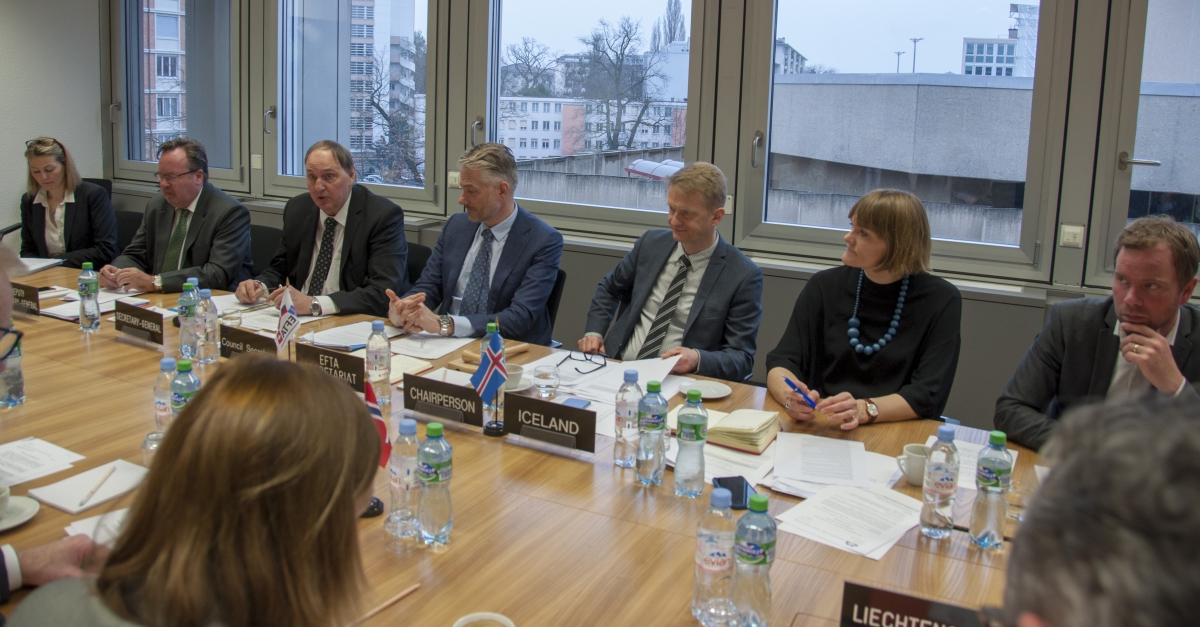 The EFTA Council met for the second time under Icelandic Chairmanship in 2018 in Geneva.
The EFTA Council met for the second time under Icelandic Chairmanship in 2018 in Geneva.
During the meeting, that took place on Thursday 15 March 2018 in Geneva,  the delegates adopted the EFTA Council Chair rotation which sets out the Chairmanship of the EFTA Council for the period 2019-2022. For the EFTA Council, the Chairmanship rotates every six months between Iceland, Norway, Liechtenstein and Switzerland. The Council also discussed the state of play on third country issues and preparations for the Ministerial meeting which will take place in Iceland in June.
The Council Conclusions are available on the EFTA Public Register.
The EFTA Council is the highest governing body of EFTA. The Council usually meets eight times a year at the ambassadorial level (heads of permanent delegations to EFTA) and twice a year at Ministerial level.
In the Council meetings, the delegations consult with one another, negotiate and decide on policy issues regarding EFTA. Each Member State is represented and decisions are taken by consensus.
The Council discusses substantive matters, especially relating to the development of EFTA relations with third countries and the management of free trade agreements, and keeps under general review relations with the EU third-country policy and administration. It has a broad mandate to consider possible policies to promote the overall objectives of the Association and to facilitate the development of links with other states, unions of states or international organisations. The Council also manages relations between the EFTA States under the EFTA Convention. Questions relating to the EEA are dealt with by the Standing Committee in Brussels.
Here you can find a list of Council Decisions amending the EFTA Convention since 2001.
Share this
Email Facebook Twitter Google Plus LinkedIn