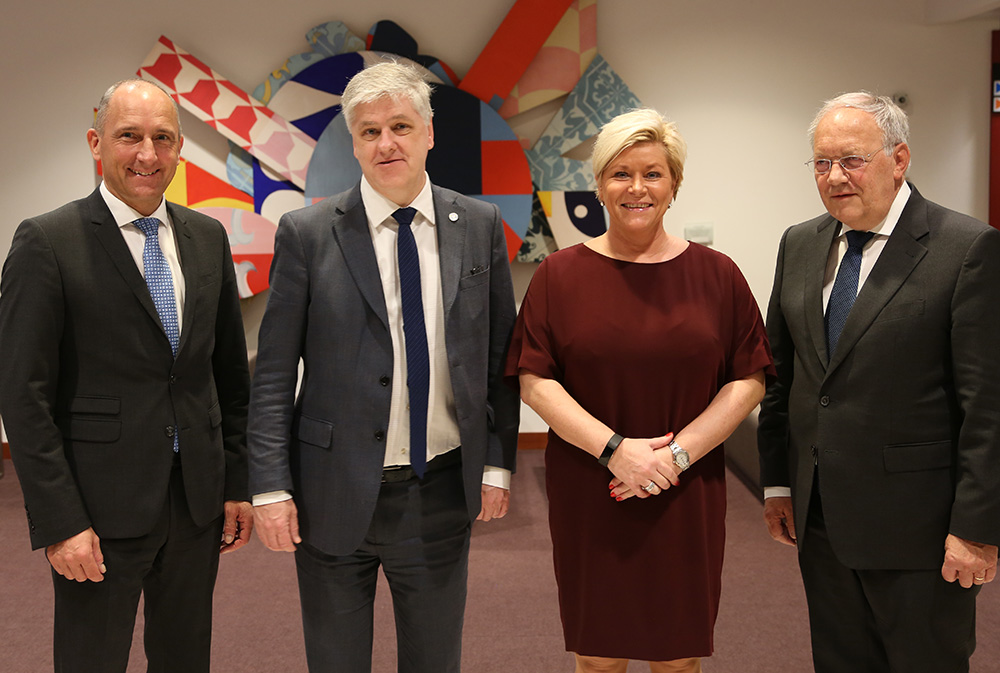 From left: Adrian Hasler, Prime Minister and Minister of Finance of Liechtenstein, Benedikt Jóhannesson, Minister of Finance and Economic Affairs of Iceland, Siv Jensen, Minister for Finance of Norway, Johann N. Schneider-Ammann, Federal Councillor, Head of Economic Affairs, Education and Research of Switzerland.
EFTA and EU Ministers of Finance and Economy discussed the economic and financial situation in Europe at their annual EFTA-ECOFIN meeting in Brussels on 7 October.

With the European economy becoming increasingly resilient following the financial crisis, and with unemployment rates falling in most countries, the EFTA States presented an overview of their economic situations and shared their vision on how to make economic growth inclusive.

“From our side, the outlook for the EFTA economies is also increasingly positive. With the exception of Iceland, which has enjoyed rapid growth rates, the EFTA States’ economies are gradually resuming a stronger growth trajectory; Norway after the fall in oil prices and Liechtenstein and Switzerland after a rapid exchange rate appreciation in 2015. I am sure that we all agree on the importance of using this broad-based upswing to build buffers and implement structural policies that will underpin growth and resilience in the long term,” said Mr Benedikt Jóhannesson, Minister of Finance and Economic Affairs of Iceland and Head of the EFTA delegation to the meeting.

Low inequality and low poverty rates in the EFTA States are largely supported by high employment, a highly skilled labour force, publicly financed education and a generous welfare state, according to a joint paper prepared by the EFTA States.

Nevertheless, the EU and EFTA countries share several important economic challenges. Globalisation and new technologies are changing the nature of work. Digitalisation and automatisation are seen as key influences on future labour markets. The demand for labour to carry out routine and manual tasks will likely decrease, whilst demand for high-skilled labour will increase.

The EFTA States acknowledge the importance of employing economic policy, as well as supporting innovation and private investments in order to tackle these challenges.

“The economic potential brought about by automatisation and digitalisation can best be facilitated if private initiatives receive the necessary freedom to exploit the opportunities at hand. Digital transformation should therefore not be limited by unsuitable regulation restraining innovation.”

On the subject of Brexit, EFTA Ministers reiterated the importance of being consulted throughout the negotiations, as their outcome could be a major source of uncertainty for the future European framework.

“The EFTA States that participate in the European Economic Area will be affected by Brexit in almost the same way as the EU Member States. It is therefore important for the EEA EFTA States to be closely consulted on the content and progress of the withdrawal negotiations and to have the opportunity to participate in any arrangements relevant to the EEA. Switzerland, for its part, will also have to find new legal arrangements with the UK, as the Swiss-EU bilateral agreements will no longer apply to Switzerland’s relations with the UK. Importantly, the UK’s exit from the EU should not give rise to new barriers restricting trade and business relationships,” Minister Jóhannesson said.

High-resolution pictures from the meeting.