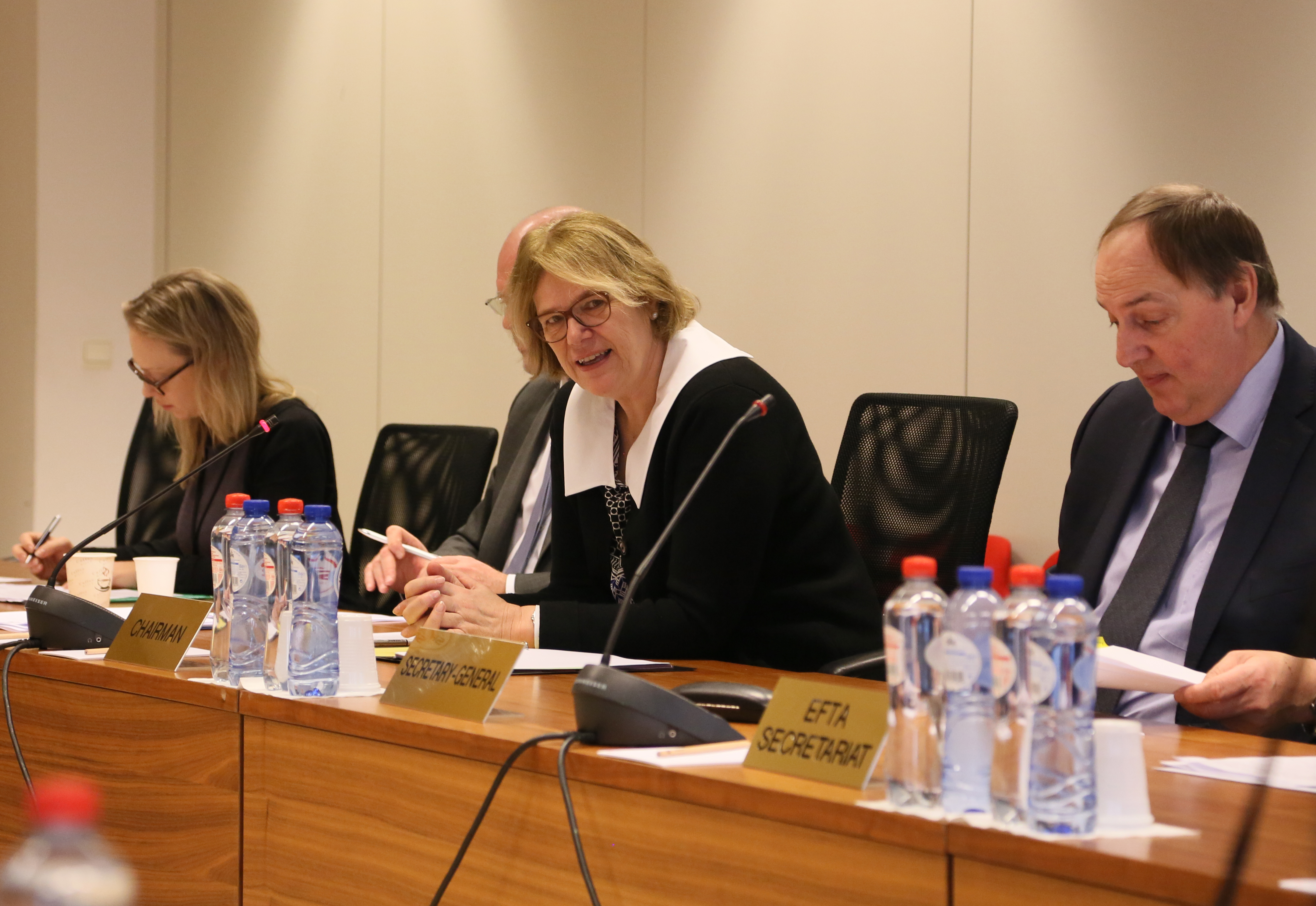 Ambassador Oda Sletnes chairing the meeting, with Kristinn Árnason, EFTA Secretary General (right) and Turi Bakke, First Secretary Norwegian Mission to the EU (left).
In its last meeting of 2016, on 2 December, the EEA Joint Committee adopted 39 decisions incorporating 58 EU legal acts into the EEA Agreement, bringing the total for 2016 to 250 decisions and 405 acts. The EFTA Standing Committee met the day before, on 1 December.
The 405 acts incorporated in 2016 cover a wide range of topics. Some major acts that were incorporated in the first half of the year include decisions on lower roaming prices, standardised mobile phone chargers and revised public procurement rules. Three directives, which together represent a major overhaul of public procurement law, were also incorporated. This new set of rules simplifies public procurement procedures and allows for more flexibility, which in turn should open up the public procurement market in the European Economic Area.
Also incorporated this year were acts regarding aviation security, including a regulation on third countries recognised as applying security standards equivalent to the common basic standards on civil aviation.
In the second half of 2016, a new set of European rules providing consumers with alternative ways to settle disputes out of court was adopted. The objective of these rules is to stimulate Alternative Dispute Resolution (ADR) and thus also to improve consumer trust in cross-border and online trade within the EEA. Resolving disputes in this way is generally easier, faster and cheaper than before a court.
Regulations establishing the European Financial Supervisory Authorities (ESAs) into the EEA Agreement were also incorporated, safeguarding a homogenous Internal Market in Financial Services throughout the EEA. The decisions adopted by the EEA Joint Committee extend the post-financial crisis institutional structure to the EEA EFTA States, in part by granting new powers to the EFTA Surveillance Authority. They allow for the incorporation of numerous acts aimed at rectifying flaws in the pre-crisis financial regulatory framework, and secure continued access for financial undertakings from the EEA EFTA States to the Internal Market.
The EEA Joint Committee provides a forum for the EEA EFTA States and the EU to exchange views and take decisions by consensus to incorporate EU legislation into the EEA Agreement. The meeting was chaired by Ms Oda Sletnes, Norway’s Ambassador to the EU.
Priorities for the Norwegian Chair of the EFTA Standing Committee in 2017
Norway will take over the rotating biannual chairmanship of the Standing Committee of the EFTA States on 1 January 2017. At the Standing Committee meeting on 1 December, Norway introduced its Work Programme for the first half of 2017.
The main focus areas will be:
- Legal acts awaiting incorporation. Continue work to reduce the number of legal acts awaiting incorporation in the EEA Agreement, including improving coordination in and between the EEA EFTA States at all levels. Efforts will focus on ensuring the incorporation of acts and packages that have been outstanding for a long time, including acts related to the European Financial Supervisory Authorities, the Third Energy Package, legislation on organic production, the Paediatrics Regulation and the Telecoms Package (BEREC).
- Brexit. Work to establish regular consultation between the EU and the EEA EFTA States on EEA-relevant aspects of a UK withdrawal agreement under Article 50, and on future relations between the EU and the UK.
- Information on and knowledge of the EEA Agreement. Strengthen knowledge of the EEA Agreement and the EEA Financial Mechanism for the 2014-2021 period in the EU institutions and EEA States, including organising events and spreading knowledge of available EEA information tools and systems.
Full list of EEA Joint Committee Decisions adopted in 2016
Provisional texts of EEA Joint Committee Decisions in 2016
Share this
Email Facebook Twitter Google Plus LinkedIn